There is one thing I want to make clear right at the beginning. I think the idea of this campaign is ingenious and the way of creating awareness for the problem is extremely smart. I respect all the creatives involved and I don’t want to expose somebody or talk bad about colleagues. I just want to point out, that in my opinion the campaign has a much greater potential. Maybe I’m wrong because I don’t know all the circumstances. Maybe they will post more videos in the upcoming days. But for now build your own opinion. 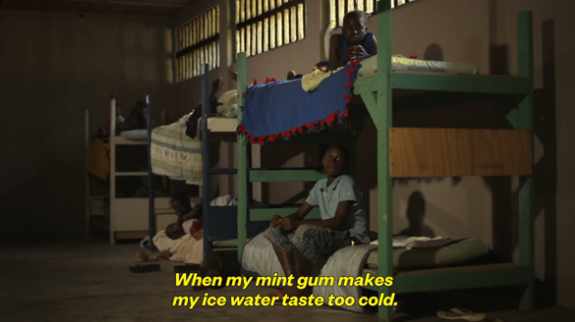 What I’m talking about: The campaign I mentioned above is the “First World Problems are not problems” made by DDB New York and Water is Life, a non-profit organisation addressing the global crisis arising from the dearth of drinkable water around the world. Their idea is to collect tweets posted as part of the #FirstWorldProblems meme (annoyances which seem insignificant compared to problems in Third World countries) and take a film crew to Haiti to film a variety of locals reading aloud their responses or comments to the #FirstWorldProblems tweets. Each resulting personalized video was tweeted to the original author with a simple call to action: Donate to help solve real problems.

The anthem video for the campaign

I was impressed and emotionally touched when I saw the videos. Simple and effective. I was about to post them here immediately and so I watched all the different clips. The first thing that made me suspicious was the look of the tweets in the beginning of each video. Same Twitter design, same number of retweets. 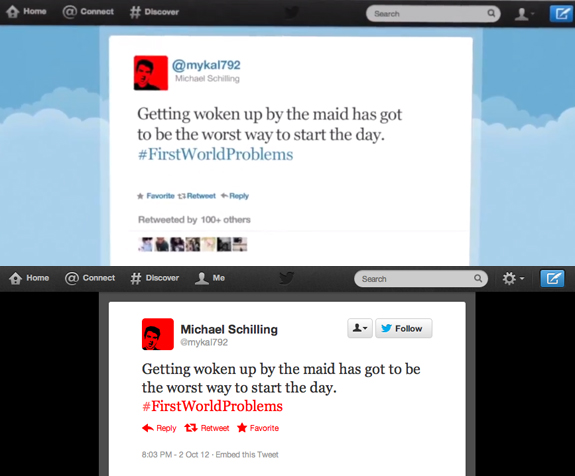 I did a short research to see who tweeted the #FirstWorldProblems which were selected to create the answer videos for (there are 9 different for now). The LinkedIn profiles of the nine users revealed that all of them are working in the advertising industry and that there are some conspicuous connections:

Just a coincidence? I guess, all these Twitter users are friends of people involved in the campaign. And I suspect that they were asked to tweet the specific First World problem. Or how would you interpret the fact that all these people posted a #FirstWorldProblem between the 2nd and 4th of October (not all tweets are from October 2nd as they say in the videos).

It’s legitimate to produce a campaign like this. But one question arises: The goal is to raise awareness and get people to donate money. The campaign now is based on “fake” tweets. Why didn’t they use real #FirstWorldProblems tweets? There a lot of them every minute! What about the opportunity to reach “real” users, to be much more effective, to be more authentic, to spread the message far beyond the community of advertising industry? I would love to know why they chose this direction.

This kind of advertising which uses fake communication to create a feeling of realness often looks like it was made just for award shows. And when we have a look at what Amir Kassaei, Chief Creative Officer DDB worldwide, said in an interview (German) with Der Standard in August, it appears even more questionable:

For me, it is a missed opportunity. Nevertheless I assure you once again that I like the campaign a lot and I’m pretty sure the emotional responses to #FirstWorldProblems will raise awareness.

Due to the fact that Google just announced they won’t continue the Feedburner API after October 20, I changed my feed url to the one WordPress is offering. Even so the core service of Feedburner is not affected yet I thought it’s the best decision to get independent from a service which was’t improved much since 2007. And to be honest I never had a big benefit because the statistics weren’t very accurate and helpful for me.

So, please change the address of Frontand.de in your rss reader or if you want to subscribe now, use following urls:

Mark Zuckerberg yesterday updated his status with the announcement that Facebook reached 1.000.000.000 active users last month. A big milestone for Facebook. And even if we don’t like it, a milestone for the whole web.

Additionally Facebook is celebrating its succes with its first commercial ever: The Things That Connect Us. While W+K Portland definitely produced a bunch of beautiful visuals for this spot I am not sure about the message. The comparison between the social network and a chair appears everything but emotional or natural. What do you think?

I just found a good comment from Robert Scoble: “So, what is Facebook? Is it a chair? No. It’s the future and the future changes often and makes us uncomfortable. That said, brilliant piece of marketing. Even if it is a bit weird.”

As always: Please keep telling me if I did something wrong in my posts as I am still not a native speaker :)

In August I attended a CreativeMornings in London and had the opportunity to see Matt Buckhurst and Adam Savage from FutureBrand talking about the branding of the 2012 Olympic Games. I wrote about it. Finally the talk is available online and I really recommend it. Have fun.

The video below shows the impressive new version of USAToday.com. I love the design, the layout and the concept of the page-turning model. Great work by Fi:

The project in collaboration with Gannett took over a year to complete, involved all departments within Fi from strategy to UX to design to development, and was spear-headed by the desire to radically re-imagine the way users interact with news online.

I’m happy about eBay’s announcement yesterday. After 17 years they will replace their logo. Following the trend of simplifying visual identities (I wrote about Microsoft and Nivea some days ago) they killed the chaotic arrangement of characters, the overlaps, and chose a new font. All characters sit on a line now, with just slightly different colours (same color palette).

I admit that I don’t know if they chose the best execution with this new logo (I read some opinions about how eBay is losing personality with this new logo), but I believe the direction is right and primarily I’m happy we won’t see the the previous one anymore.

Last saturday we did a really nice tour along the Regent’s Canal. By accident we passed this graffiti. I have to admit it looks boring but the story behind it is pretty interesting if you are interested in street art. 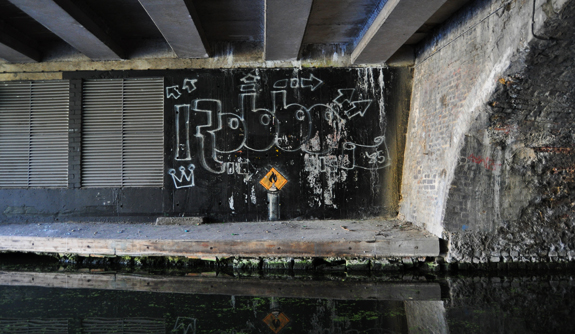 It’s a funny feeling because we wouldn’t be able to recognise it 2 weeks ago, before we saw Exit Through The Gift Shop, visiting the Mr. Brainwash exhibition and start looking at all the famous street art pieces around shoreditch.

Great work by Sagmeister. I really like the idea of transient art. 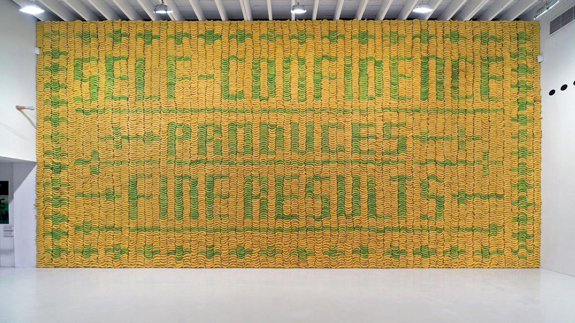 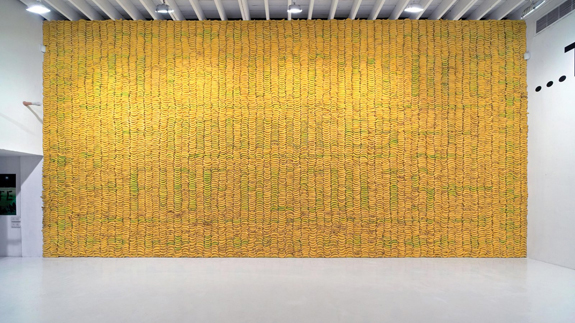 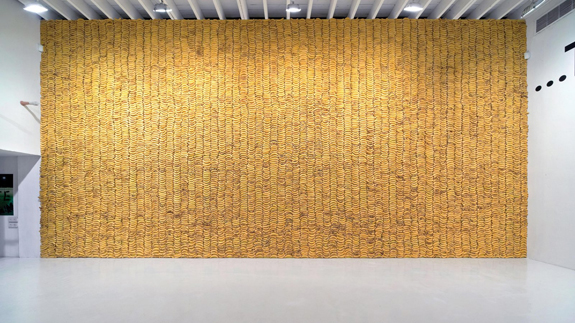 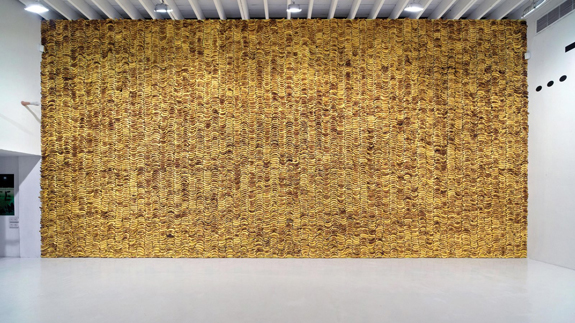 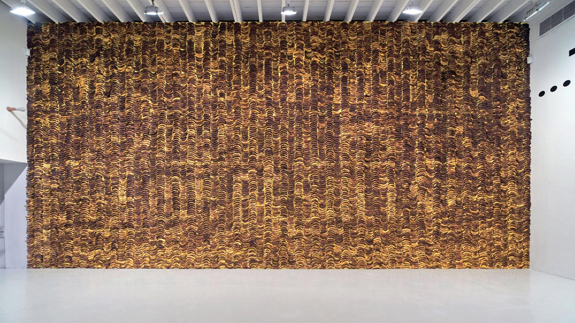 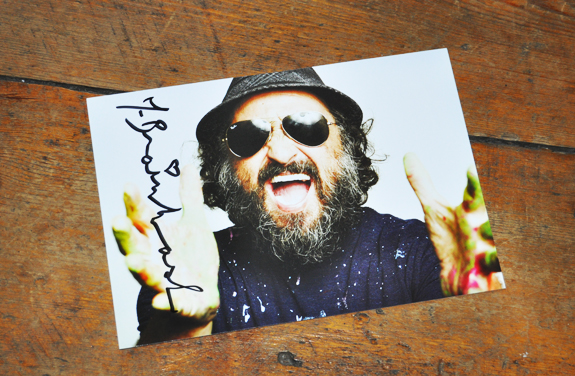 Today we went to the Old Sorting Office on New Oxford Street where Mr. Brainwashs solo exhibiton life is beautiful was extended until September 7th. Fortunately, we were able to meet Thierry Guetta in person. The mysterious story about his art, the relationship to Banksy and the possibility of being fooled by Banksy make the atmosphere in the show even more fascinating.
If you have the chance to get there or see the exhibition anywhere else, I would highly recommend it (and watch Exit Through the Gift Shop before). 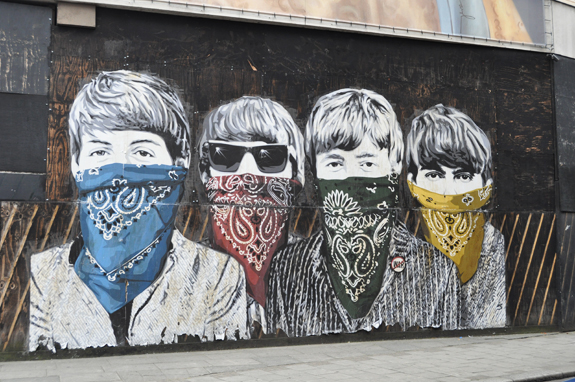 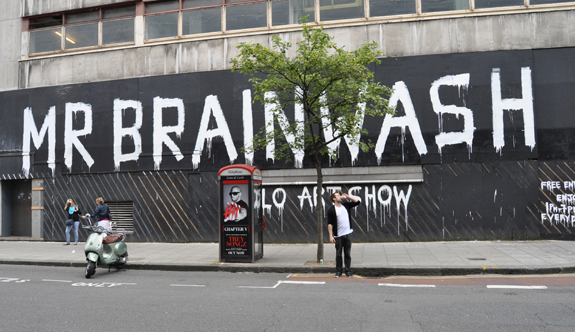 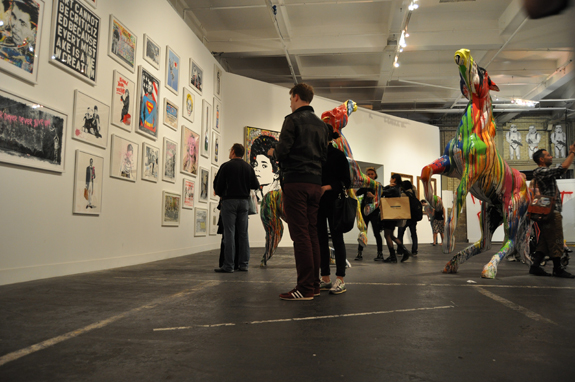 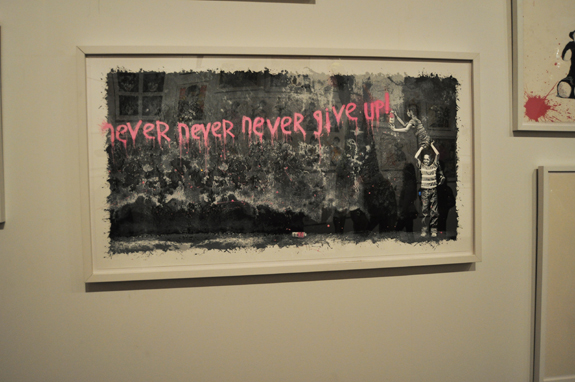 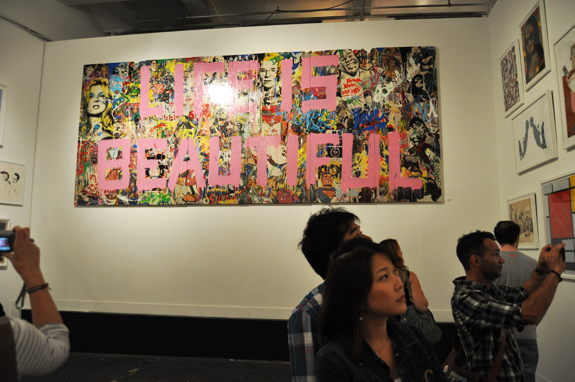 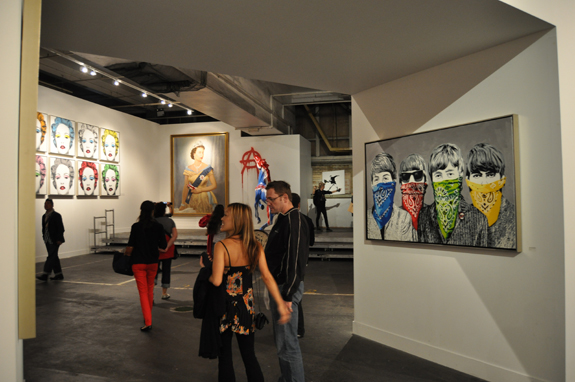 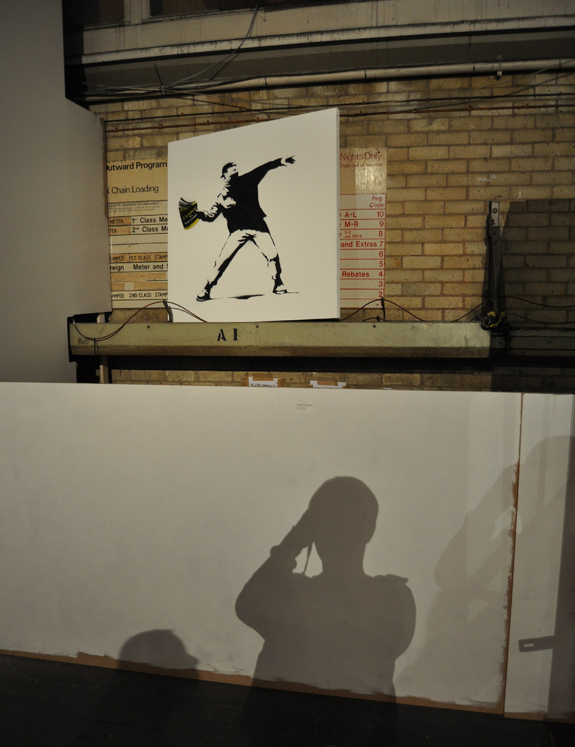 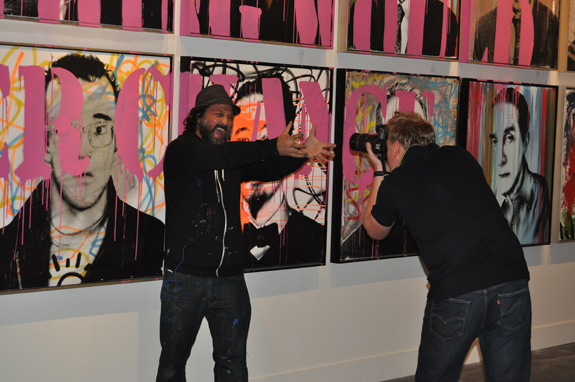 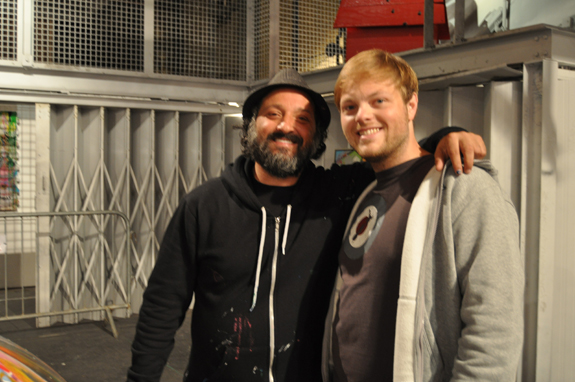 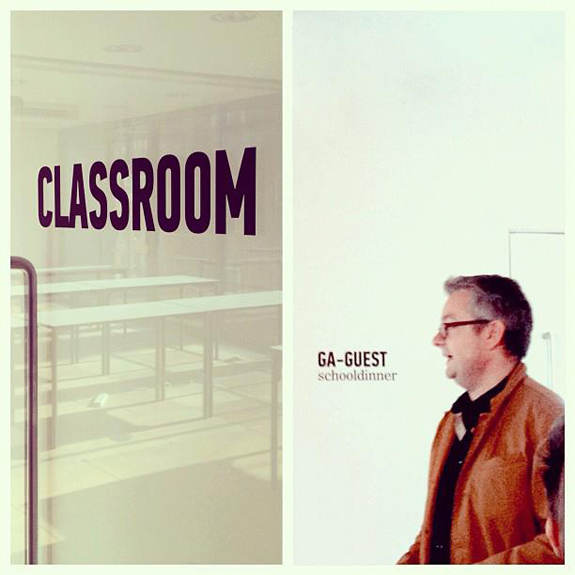 Finally I got the chance to attend at my first CreativeMornings today. Since the series of breakfast talks got to Berlin I tried to go there but I never got a ticket or had the time. By accident I visited the CM website last week and saw this event in the General Assembly, a really nice location above the startup accelerator White Bear Yard and IDEO’s London office. And it’s just a 5 minutes walk from the AKQA office. Thanks to my alarm clock I got a ticket!

The breakfast was nice and the talk was awesome. Matt Buckhurst & Adam Savage from FutureBrand talked about their work for the “most complex branding in the history of UK marketing” (Times), the branding of the Olympic Games 2012 in London. The explanations about the process, the insights and the thoughts behind every part of communication were fascinating. I hope the video will be online soon so you get the chance to hear/see them too.